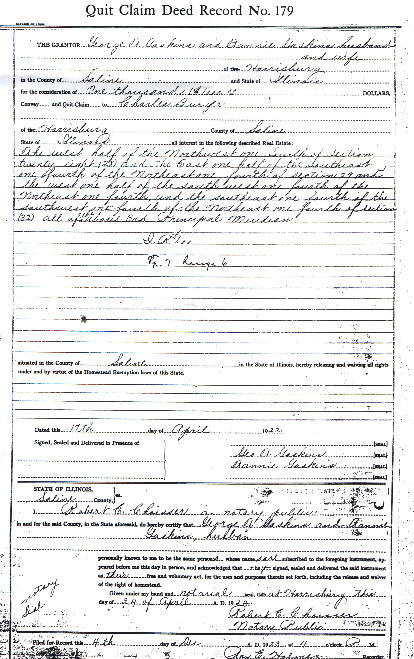 The Grantor George Gaskins and Fannie Gaskins husband and wife in the County of Saline of the Harrisburg for the consideration of One thousand $1000.00 Dollars.

Convey...and Quit-claim to Charles Birger of the Harrisburg County of Saline

State of Illinois all interest in the following described Real Estate:

Situated in the County of Saline in the State of Illinois, hereby releasing and waiving all rights under and by virtue of the Homestead Exemption of this State.

State of Illinois
Saline County
I, Robert E. Choisser a notary public in and for the said County, in the State aforesaid, do hereby certify that George Gaskins and Fannie Gaskins, husband personally know to me to be the same persons whose names are subscribed to the foregoing instrument, appeared before me this day in person and acknowledged that they signed, sealed and delivered the said instrument as their free and voluntary act, for the uses and purposes therein set forth, including the release and waiver of the right of homestead.
Given under my hand and notarial seal, at Harrisburg this day of 24 of April A. D. 1922.